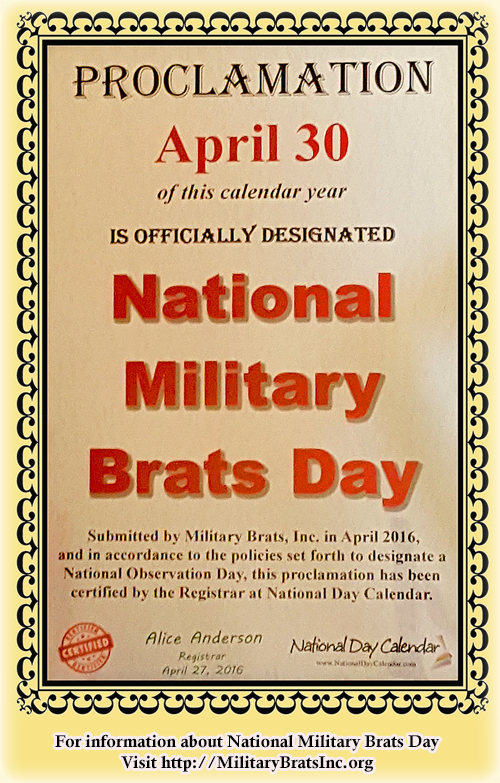 MILITARY BRATS MOTTO: “Children of the world, blown to all corners of the world, we bloom anywhere!” The Dandelion is the symbol of our silent tribe.

PROPOSED: That Congress set aside a day each year as National Military Brats Day, so Americans can say thank you to these patriots, young and grown, for their dedication and sacrifice in the service of their country.

(January 2, 2015) – Since 9/11/2001, Americans have become increasingly appreciative of the service and sacrifice of our Military men and women. The work these service people do is worthy of the country’s honor and respect. But because of them, there is a vast community of others who are largely unsung and usually silent who also have given a treasure beyond measure in the service of their country.

There are an estimated 15 million Military Brats – those who are or once were the children of active duty service personnel – who go where they’re told, move when they’re ordered, who pull up stakes leaving dear friends and familiar schools to again and again become the newcomer, the outsider, sometimes the outcast. One of the surest ways to give a child or adult Military Brat pause is to ask, “Where are you from?” A myriad of possible answers plays across their faces. Many give up and either answer, “Nowhere,” or, “Everywhere!”

Military Brats learn to be strong, stoic and honorable while they endure weeks, months, sometimes years without a beloved parent, because they know it is what America expects of its military families. Within the Military Brat ranks, the most honored are those whose parents make the ultimate sacrifice giving their lives for their country. The sacrifices of those children deserve collective, national condolence as well.

Military Brats are nothing if not adaptable; they have to be because every year or two they might be asked to start over in a new city, a new state; even a new country. It is what Military Brats do and it speaks to who they are.  We embrace the title, “Military Brats”.  The word ‘brat’ simply means “a child of..”.  A Military Brat is a child of the military.

Today, we are proposing that Congress set aside a day to acknowledge just how precious these military children – present and past – are and to say thank you for their unmistakable sacrifice and service. Unlike most of their Military parents, Military Brats did not volunteer for this assignment, but most take it on proudly and execute it with distinction. It is past time for America to say thank you to these patriots by giving them a day of recognition and respect.

You can do your part by forwarding this information to your local, state, and national representatives.

In the meantime, we are naming April 30 each year as the unofficial Military Brats Day. April is the month of the military child.  However, April 30 was selected as National Military Brats Day because it is at the end of the month and signifies that the military child grows up; and thus represents our separation from service connection. We’ll always be Brats, but we will not always be children.

UPDATE: April 16, 2016.  We reached our first goal! National Military Brats Day is now on the National Day Calendar.  This is not an official government platform, but it has become widely recognized because of the dissemination of information through various social networks, and through press releases.  It adds credibility to our effort to gain Congressional recognition.